The Sheep's Head Peninsula (Muintir Bhaire), home of the Sheep's Head Way walking and hiking route, is the smallest of West Cork's three peninsulas and is in many ways the hidden or lost peninsula - sandwiched between the better known and larger Mizen and Beara Peninsulas and Dunmanus and Bantry Bays. In 2009 it won the prestigious EDEN (European Destination of Excellence) Award and in 2015 was named Destination of the Year by the prestigious John and Sally McKenna guides having gained a reputation among foodies who are drawn to the area by local delicacies such as Durrus Cheese and Bantry Bay Mussels. To quote, "a clutch of excellent places to stay and eat and an unparalled walking experience"
THE SHEEP'S HEAD PENINSULA  (Muintir Bhaire) :

There are 3 main settlements on the Sheep's Head Peninsula.  Durrus is the largest village and is located at the gateway to the Peninsula.  Ahakista is the smallest of the 3 villages and is located on the south side of the Peninsula at Kitchen Cove on Dunmanus Bay.  Kilcrohane is also on the south side and is the last outpost being the most fartherly west.  The Goat's Path extends along the rugged north side of the Sheep's Head from Kilcrohane to the N71 near Bantry and has stunning views out across Bantry Bay to the Beara Peninsula.
The Sheep's Head was awarded the title of European Destination of Excellence - Tourism and Protected Areas - in 2009.  This competition was designed for destinations that have developed the tourism potential of their protected areas in a sustainable manner.
The Sheep's Head Peninsula offers a long distance walking route, the Sheep's Head Way, which traverses a number of protected areas known as Special Areas of Preservation, which are protected for bird life, and Special Areas of Conservation which are protected for wildlife.   It offers visitors loop walks, coastal, hill top, cliff side and river walks.
Fishing:   The area offers a diversity of fishing from the many convenient rocks and piers along Dunmanus and Bantry Bays - Durrus Pier - grey  mullet;  Kilcrohane Pier - pollock  and mackeral; Dooneen Pier - pollock, wrasse, mackeral, ling and much prized sea bass; the 'Cove', Gortnakilla Pier and The 'Airport Beach' on the northside of the Peninsula are also popular fishing spots.

Kilcrohane is the last village on the Sheep's Head Peninsula and is known locally as 'The Holy Ground'.  It is a charming coastal village lying under the shadow of Seefin Mountain overlooking Dunmanus Bay.

Kilcrohane is not just a tourist or holiday destination.  It has an all year population that is served by a primary school, a church, pubs, restaurants, cafes, B&B's and a grocery shop with post office.  There is daily transportation to the secondary school in Bantry and a bus to Bantry two days a week.  The mobile library comes to Kilcrohane twice a month and GP's from Bantry hold surgeries at the local health centre on Tuesdays and Wednesdays.  It also has a ladies' choir and a drama group.

Ahakista is located approximately half way along the Sheep's Head Peninsula between Kilcrohane and Durrus.  It is a pretty wooded coastal village that has a deep and sheltered harbour that is home to both fishing and pleasure boats.

Ahakista has 2 pubs (one with a restaurant), an art gallery with cafe and gardens, a B&B, a working pier, a small beach, a primary school and a church.  The Bantry to Kilcrohane bus passes through Ahakista on Tuesdays and Thursdays.  It also has a rowing club and the annual August bank holiday regatta and Graham Norton hosted table quiz should not be missed.

The Air India Memorial Garden, beach and sundial are here and each June the local and international community remember the air crash of 1985 that resulted in the deaths of 329 people.  The sundial is by Cork sculptor Ken Thompson and was donated by the people of Canada, India and Ireland. 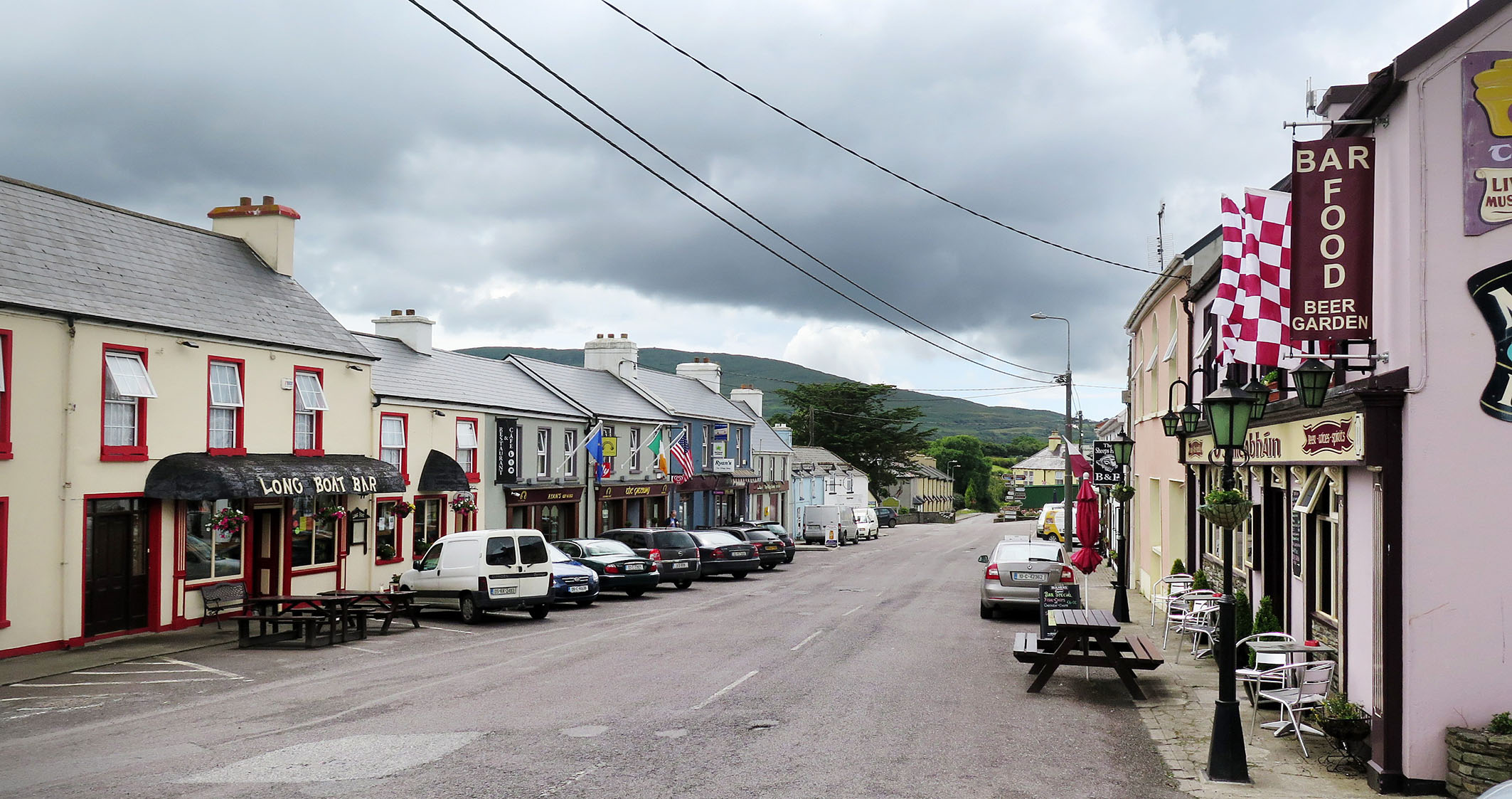 Durrus is the largest of the 3 Sheep's Head villages and is located at the gateway to the Sheep's Head and Mizen Peninsulas.  In former times it was known as both 'Four Mile Water' and 'Carraigbhui' (Yellow Rock).  There is a disused grain store just outside the village which is reported to have been used as a refuge for children during the Famine.  In the grounds of Durrus Court, a fine Georgian house, are the remains of Cul na Long Castle - built by the McCarthys between 1601 and 1640.

Durrus village is a lively place with a shop, bars, restaurants and B&B's.  There are 2 primary schools, a pre-school, an award winning garden (open to the public), 2 churches, a community field, a community hall, a community centre and a children's playground with tennis court. There is daily transportation to the secondary schools in Bantry and Schull and a rural transport bus to Bantry on Tuesdays and Thursdays.  It also has a thriving 'Mens' Shed' group and men's choir, an athletic club and is the home ground of the Muntir Bhaire GAA club that serves the Peninsula.

The Wild Atlantic Way - the longest scenic drive in Europe stretches from Co. Donegal in the northwest down to Co. Cork in the southwest and continues along the Sheep's Head Peninsula.